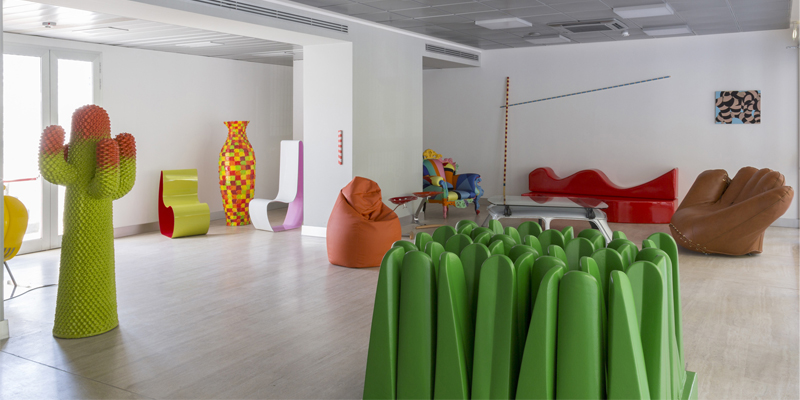 Internazionali BNL d’Italia
7 May-17 May

Twiner#3 Landscape is the title that Secondome design gallery and Ex Elettrofonica Contemporary art Gallery gave to their project for the Corporate Hospitality during Internazionali BNL d’Italia, 2015 edition.

The focus of this year exhibition is entirely on the location: the Foro Italico is a building with an extraordinary value in terms of urban integration, history, art and architecture. Despite its central position in the city, the Foro Italico is overlooked, on one front, by the verdant Monte Mario and embraced, on the other side, by the river Tiber.
Nature and the typical fascists marble building merge in this sight and the same harmony is pursued in the setting of Corporate Hospitality Lounges.
Both the artworks and the pieces of furniture chosen for the new set up of the spaces, aim to set a dialogue between the inside of the room and the nature surrounding the Tennis Stadium, for a surprising and osmotic feeling.
Each room depicts a stereotypical landscape, represented in a non-conventional way.

A monochromatic set-up based on the several tones of green, is meant to build a link between inside and outside of the room.
All of the artwork displayed in this lounge, the painted fabrics by Guendalina Salini, the faint, animated drawings by Avish Khebrehzadeh, the pictures by Alessandro Dandini de Sylva and an irreverent sculpture by Davide Monaldi, depict the landscape in its purest form.
The design choses to mix both hand made and limited edition pieces with the S3 table by Giovanni Casellato, the Bench in white by Giovanni Minelli, for Secondome edizioni: the Panorami mirrors by Zaven, the cloche Top Good by Emmanuel Babled, both table and armchair of Nucleo’s collection Petroglyph and the glass and concrete vases In the air by FX Ballery, iron flowers by Antonino Sciortino, Paniepesci armchair by Alessandro Zambelli and Fronzoni chair by A.G. Fronzoni for Cappellini. Bergere Longe sofa, Chermine Longe armchairs by Piero Lissoni and Bauhaus small armchairs by Draga and Aurel courtesy of Baxter.

The deer head and the golden eagle by Meital Katz- Minerbo introduce the theme of the nature as fetish and the fiction is brought to the climax through the monochromes by Antonello Viola, that give a real name to an infinite sight. The whole furnishing is intended to create a fictional environment, through the artificial color gold and pink: the stools by 4P1B for Edizione Limitata, the Van Gogh stool by Parisotto+Formenton for Mingardo design faber, the Sacco by Gatti – Paolini – Teodoro for Zanotta, the console by Leftover, the Gong small table by Giulio Cappellini for Cappellini, the Dolly armchair by Doriana and Massimiliano Fuksas, the Graz baby pouf and the Damasco sofa by Paola Navone for Baxter.

The Max Renkel works in this room create a dreamlike atmosphere. Adidas Yeezy 550 Dames The gaze gets restless, moving among colors and lines, like in a dream, when every small thing is significant. Nike Air Max 90 Dames groen This feeling is magnified by the outfitting characterized by pieces of furniture from the most iconic design and the new pop-inspired productions: the Superonda couch by Archizoom and the Joe armchair by De Pas – D’Urbino – Lomazzi courtesy of Centro Studi Poltronova, the Mezzadro stools by Achille and Piergiacomo Castiglioni and the Sacco by Gatti – Paolini – Teodoro for Zanotta, the Vespino by Gio Tirotto for Modo, the Metacactus by Drocco – Mello and the Pratone by Ceretti – Derosso – Rossi courtesy of Gufram, the Proust armchair by Alessandro Mendini and the Tulip Armchair by Marcel Wanders for Cappellini, the iron chairs Giulia and Carolina by Giovanni Minelli, the Mini table by Artwo.

Two big paintings by Enzo Cucchi, one of the leading spokespeople of the historical artistic movement named Transavanguardia, set the tone for the Presidenziale Lounge: the emblematic representation of the Italian landscape, deeply influenced by the human interference. On the canvas Cucchi depicts intense and symbolic paintings, using a visionary state of mind to merge myth, literature and art history in its works. Echo to those artwork are the two pictures by Alessando Dandini de Sylva: the artist builds his own device to reproduce the image through light, in his workshop. The design is minimal, severe, almost stark. Tajh Boyd Clemson Jersey Table and stools by Leftover, Chester couch and Vienna Baby armchairs by Paola Navone and Bauhaus unique by Draga and Aurel courtesy of Baxter, Coffee Table by Victoria Wilmotte for From-To, the Mini bottle small table by Barber – Osgerby for Cappellini.

The soft color and the repeated gestures in Alessandro Sarra’s works give the room a suspended, ethereal feeling. Kelly Olynyk Gonzaga Jersey The hidden scheme behind the nature is pursued through abstraction, by looking at primordial gestures and shapes into daily life events. Adidas NMD Heren The pieces in this room are historical and genuine 50s’ and 60s’ vintage furniture.