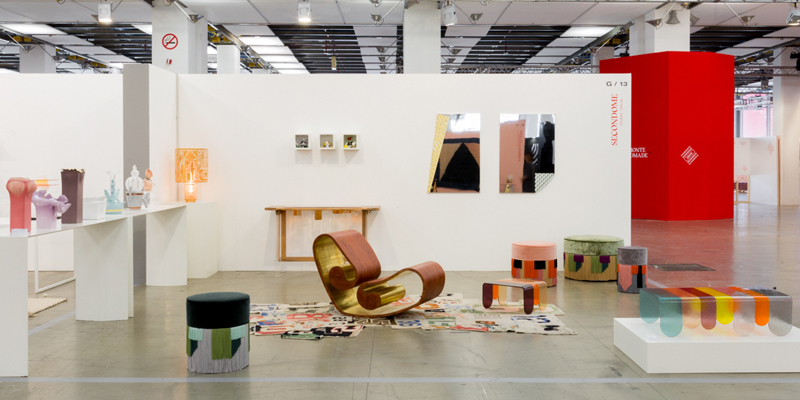 LORENZA BOZZOLI was born in Milan, were she currently lives and works. She attends the Academy of Brera, and moves in New York, starting her experience inside the fashion field with the first self-produced lines. Returned to Milan she works with Elio Fiorucci and companies like Basile, Camper, Sergio Rossi, Plein Sud. Her interest moves then toward the world of design, articulating her own job through a vast series of collaborations with brands as Alessi, Moooi, Dedon, Tato, Spazio Pontaccio and Slamp.
GIO TIROTTO Everything he designs comes from the attention towards what’s around him, living or inanimate. If there is a limit between art and design, he tries to erase it and re-design all the existing complicity among human beings and objects. This is the reason why he believes that rituals, memory and imagination are often the essential function of things.
ANALOGIA PROJECT is the result of collaboration between designer Andrea Mancuso and architect Emilia Serra. After their degree in Italy, they met at the Royal College of Art , London, in 2010. Andrea Mancuso is a designer with a long experience with design product both on one-off and large scale production. His visual language is based on a sense of irony and surprise. Emilia Serra is an architect and a researcher at RCA focused on how to combine 3d digital technologies with traditional craftsmanship skills in order to help their valorization. Their design studio approach is based on exploring the everydayness and turning it into wonderment. Everyday space and objects represent ourselves, our past and memory, they embody our history and culture. Starting from entities that are normally taken for granted, they use everyday space and objects as a source of inspiration, wonder and surprise. Their methodology is experimental and based on the conservation and development of traditional craftsmanship skills combined with contemporary digital technologies. Their works, being installations, products or interiors, have a strong narrative connotation and each project is a pretext to tell a new story to people.

MATTEO CIBIC Matteo Cibic (1983) is an Italian designer and creative director. He is known for his objects with hybrid functions and anthropomorphic and joyful shapes. He works indiscriminately with industrial processes and small artisans, for luxury brands, collectors and hi-tech companies. His most known projects are the Domsai terrariums, 10A clothing range and the Tim Towers in Rome.
His works are displayed in museums, institutions and galleries worldwide.
In 2017 he won the EDIDA prize (Elle Décor International Design Award) in the Young Design Talent of the Year category.

HILLSIDEOUT is a joint studio by Andrea Zambelli and Nat Wilms which came to life in 2009 out of a mutual concern and discomfort for the degradation of abandoned sites in the Italian Apennines. Hillsideout expresses the need to transform the state of uselessness but also forgotten stories into practical functionality. The ancient, mainly medieval, mountain villages but also journeys abroad are the starting point for transforming the past into “living memory”. Hillsideout brings the past into the present in the form of uniquely handcrafted contemporary furniture.
PAOLO POLLONIATO Born in 1979 in Nove, a small town situated between Venice and Vicenza, famous for its production of ceramics. From six genarations, his family has been linked to the art of painting and creation of italian artistic ceramics. He attended the university of fine art in Venice and he obtained his diploma in 2007. At the moment, he lives and work in Nove (Italy).
DOC was born in 2009 following more than 30 years experience in working with leather and its variations of its founder, Domenico Calautti. A company that grew in time, ranging from leatherworks to upholstering, maintaining the same passion for craftsmanship and care for the details. The skill in cutting and working the high quality leathers has brought the company to produce precious leather objects and to collaborate with prestigious luxury firms, crafting yacht’s furnitures, refined bags for Ferrari and Audi and the interiors for Pagani Huayra.
Secondome Design Gallery is a design platform that focuses on worldwide emerging designers and innovative projects. For ten years, the Gallery has been dedicating its installation space to the design works it hosts; each piece, as a collection or limited edition series, speaks louder than words in its whimsical nature of subject versus material. Mostly handmade products, honoring the craft and practice of contemporary artisanship, reflect the traditional values of design whilst breaking the mold of lifeless objects d’art. More than just a gallery, Secondome Edizioni, since April 2008, has also established itself as a brand by producing its own collection of design objects working closely with its designers. Emphasizing on a Made in Italy brand, most of our production is hand-crafted locally. Secondome works have been displayed in some of the most important museums of the world: The Vitra Museum in Germany, The Shanghai Museum of Glass, The Grand Hornu in Belgium, La Triennale in Milan, The New Museum in New York.
Claudia Pignatale, Founder and Creative Director of Secondome Design Gallery, has dynamically dedicated her passion for art and design since 2008. She actively collaborates with international young designers under 40, along with her constant pursuit of discovering new talents and emerging artists to launch. Claudia’s mission is to turn Secondome Design Gallery and Secondome Edizioni into a pivotal center of attraction and spotlight for designers
in Italy and abroad with her attendance in international design fairs. Based in the artistic neighborhood of Trastevere, she is determined to place Rome back on the map of the international design scene and export design and Italian’s artisans’ expertise around the world through its collections.