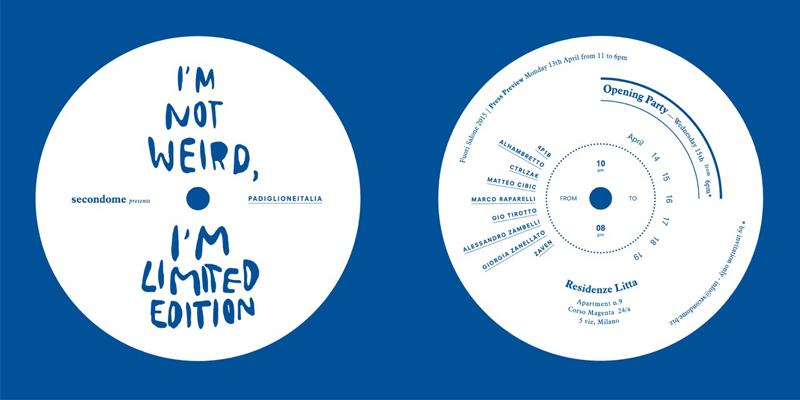 
SECONDOME presents PADIGLIONEITALIA: “I’m not weird, I’m limited edition”. An alchemic cooperation between Secondome and Padiglioneitalia mixes 100% italian design and manufactory. There are several links that connect Secondome and Padiglioneitalia: sperimentation, research as well as the choice to abandon the mechanical production in favor of craftmanship. Those are the premises for a collection, in numbered limited edition, which includes pieces set to explore the inner potential of the mix between deeply different materials such as glass and metals. The results of those experiments embody the Aristotelic process of power becoming act: objects whose idea seems familiar yet are different from the usual, whit original, entirely new and shapes indeed weird.
The designers involved in the project are: Gio Tirotto, Alhambretto, CTRL ZAK, Alessandro Zambelli, Matteo Cibic, 4P1B, Giorgia Zanellato, Zaven and Marco Raparelli.

GIO TIROTTO realizes the project COEXIST: the MOD. GROUND globe and the MOD. SKY stellar map, two objects complementar as only Sky and Heart can be, where the transparent glass allows to look to the world and the stars in their entirety, overlapping far places close in the blink of an eye, underlining both their simmetries and differences. “Logic will take you from A to B, imagination will take you everywhere.” A. Einstein. Gio Tirotto challenges the geographic logic through these objects in which distances are nullified and infinite point of view cohexist creating a whole new imaginery.

ALHAMBRETTO presents CLOU, the stop motion of an impossible instant. The nail crowls under the lightnes of the baloon. The moment becomes eternity, imprinted forever in the solid glass.
Sand clocks were among the first instruments that man devised to visually perceive and measure time. CTRLZAK’s TIMELESS project utilises the properties of traditional materials in reviewing this nearly forgotten object. Inside the glass vial though instead of sand are found refined iron fillings that trickle from one compartment to the other, revealing the passage of time not only through their movement but also through the creation of a small spatial crystalline structure.

In the UNBALANCE project by ALESSANDRO ZAMBELLI, the candle wearing out results in a loss of weight that unbalances the structure, keeping the flame in the same poin. il consumarsi della candela provoca una perdita del peso specifico, sbilanciando la struttura e mantenendo così la fiamma in un punto fisso dell’orizzonte. Staring at the candle’s edge you can observe a static state thanks to an undeneath mobile structure. An inverted roleplay: no longer the flame going down but the candle going up.

TRANSGENIC LIGHTS by MATTEO CIBIC is a series of three table lamps. The glass structures are inspired by the plant kingdom’s shapes, recognizable despite the genetic mutation process they seem to have gone through. The photosyntesis process gets reversed by those mutant “plants” that spread light instead of absorbing it. Cactus, spores, leaves, mix and melt their shapes to create new, hinting ones that enclose and reshape the light.

DEUS is a couple of objects turned into machines by 4P1B. The brass structure is actually a mechanism that allows the object to be used. The pitcher can be tilted to pour its content, the candle holder can turn off the flame by pulling a lever that shuts down the oxigen income.

PHARAOHS by GIORGIA ZANELLATO is a collection of three vases made in glass and metal. Shapes, proportions and colors are directly inspired by those of the iconic Egyptian Pharaohs. Simple transparent glass cylinders contrast with bent metal fans that create strong effect of light and shadows. Nike Roshe Run Dames groen The metals used are inspired by type and color to those used in ancient Egypt recalling distant scenarios.

The lamp OLIMPIA by ZAVEN is a 3D collage, made of a structure of metallic sheets and a cup of borosilicate opaque glass. An asimmetric table lamp, that rises up like a stairway and pushes up the light.

A STORY THAT DOESN’T GET TOLD is a site specific installation: an iron table, realized by Giovanni Casellato becomes the “canvas” for Marco Raparelli to work on, with drawings and two objects from the daily life, a glass and a bottle, made as if they came out of a comic book. Expanding his iconographic imagery to encompass reality, Raparelli gives life to a parallel universe, balanced between truth and fiction, rationality and irony, to remind the observer that things are never as they seem.

GIO TIROTTO Everything he designs comes from the attention towards what’s around him, living or inanimate. If there is a limit between art and design, he tries to erase it and re-design all the existing complicity among human beings and objects. This is the reason why he believes that rituals, memory and imagination are often the essential function of things.

ALHAMBRETTO operates on the fields of product, interior and graphic design following the right balance between functionality and poetry. Projects are characterized by the ground-breaking use of traditional materials, the reevaluation of found materials and special attention to sustainability issues. adidas stan smith dames rose Products by Alhambretto take a critical look to the past and recover traditional know-how techniques from a contemporary viewpoint.

CTRL ZAK is a hybrid studio that integrates different disciplines and cultures. The founders, Katia Meneghini and Thanos Zakopoulos, are both artists and designers in their own right. The Italian-Greek duo’s creations are inspired by their travels and experiences around the world and by their own rich cultural backgrounds. The studio creates artworks, objects and spaces but– above all– situations where people can come together in order to make what really matters: human relations. CTRLZAK’s projects and extensive research into tradition and cultural context create a new hybrid future by learning from the past. Each project is a story waiting to be told, with a multitude of forms and endings. Each one experiments with diverse methods of narration where irony and symbolism go beyond aesthetics and functionality, in order to activate mechanisms of reflection.

ALESSANDRO ZAMBELLI lives and works in Mantua, Italy. He studied industrial design and materials engineering at the Cova School of Design in Milan, and his career took off at bathroom designer Agape in 2000. A few years later, in 2003, he founded Alessandro Zambelli Design Studio.
Zambelli is a co-founder of Padiglione Italia, a designers’ collective which seeks to present the specifics of the Italian design scene. Zambelli has exhibited at the Beijing Design Week, Invito a Tavola (New York), the Tokyo Tableware Festival and F.O.O.D. (Mint Museum, Charlotte, NC) and other international design fairs.
He never sees his work purely as an exercise in style. He believes an inner soul must enliven every object .

MATTEO CIBIC Eclectic in his designer career, he defines himself a problem solver and it is this characteristic that makes him smart. Belonging to a family with strong design traditions (grandson of Aldo Cibic) he knows and frequents this world with simple naturalness, with an extremely open-minded and unconventional manner and manages to be in harmony and to put everyone at ease. He is considered a young trendsetter (he was called by Beatrice Trussardi, Global Leader of Milan, to join the WEF Global Shaper).

4P1B Based in Milan, 4P1B Design Studio operates in the world of design since 2008 and its philosophy is founded on the strong belief that everything is design. Because of this, its work ranges widely from furniture to lighting, from exhibitions to retail designing, from complex concepts to minute details. Tony Gonzalez #88 Jersey Thus, 4P1B covers various trade sectors including solution developments for mass productions just as well as focus on experimenting within exclusive limited editions. At the core of all 4P1B’s works reigns its designing method and the constant strive to optimize formal, functional, commercial and innovative solutions.

GIORGIA ZANELLATO Born in Venice, Giorgia Zanellato graduated at IUAV of Venice in 2009 and at Ecal (Switzerland) in 2011 with a Master in Product Design. In october of the same year, she joined Fabrica, the Benetton Research Center, where she is actually working as product design consultant.
Giorgia is been working as a freelance designer as well for different clients such as Moroso, Atipico, Rubelli, Petite Friture and Galleria Luisa Delle Piane.
Her designs have been exhibited at Triennale Design Museum, Maison & Objet, Miami Art Basel, London Design Festival, MUDAM and others.

MARCO RAPARELLI is a videomaker, visual artist and works with video, drawing, installation, he studied at the Academy of Fine Arts in Rome, video animation at Loughborough College of Art (UK) and painting at Accademie de Beaux Art, Brussels, lives and works in Rome. The artist’s roots lie in the black and white illustrations of comic books. Using a highly personal and original approach, he creates an apparently ironic communicative language that is undoubtedly effective for exploring various aspects of the surrounding world, including the art world, thanks to his insightful view of society. Drawing is a crucial feature of Raparelli’s work although he avoids any tendency for decoration to predominate.

GIOVANNI CASELLATO born in 1968, graduates in architecture from IUAV in Venice. He has been working in the design field for several years, using iron as privileged material. His works have been exhibited in several Italian and European cities. KU JERSEYS Mentioned by Banca Aletti as sculptor for art investments. Giovanni looks for the “unique” in every piece, carefully working on lines and finitures.

Padiglioneitalia is a portrait of contemporary Italian design that defines the varied creative borders of the authors involved narrating stories which, even though expressed in diverse manners, have a distinctive common ground.