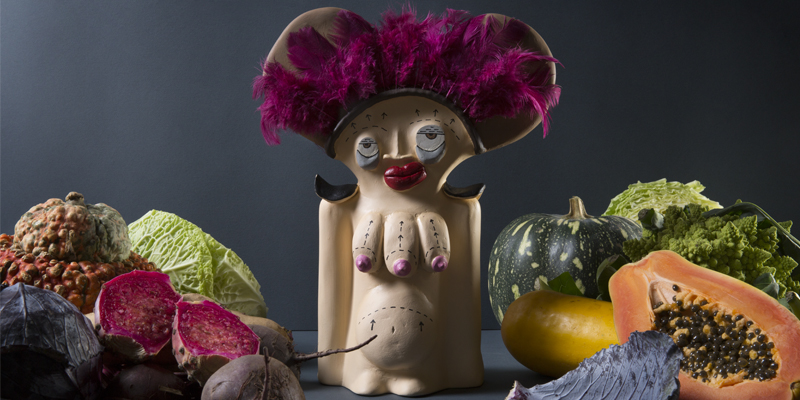 
Secondome presents “DIVINA SPROPORZIONE” (i.e. “Divine Disproportion”), a group exhibition curated by Valentina Guidi Ottobri.
The definition of Beauty has, throughout time, remained an obsession for artists and philosophers, who through their masterpieces, deeply influence the trends of contemporary society.
In past centuries “Ugliness” was considered as the opposite of “Beauty”. But ugliness as defined by Rosenkrantz in his 1853 “Aesthetics of Ugliness”, is not only the “hell of beauty”, it actually has its own history.
“The modernity of Rosenkranz’s work is not only in his farsighted study of the “ugly” aspects of art – which abundantly characterize our time – but also in his questioning the very purpose of aesthetics: after him, aesthetics and beauty don’t necessarily coincide . Aesthetics in themselves do not constitute the theory of beauty, and an unsettling interpretation unravels on the deceptive and multishaped aspects of reality.” (Karl Rosenkranz, “Aesthetic of Ugliness” curated by Sandro Barbera, intro by Elio Franzini)
Divina Sproporzione (Divine Disproportion) is therefore a dream like journey where the perception of a lack -or- variation in harmony, expose the betrayal of appearance. An allegorical excursus on contemporary design whose main objective remains that of re-encoding the more recently exacerbated and defaced classical canons of aesthetics, with a view to reinstating contents at the forefront.
An eulogy for deformity, as biological characteristic of mankind currently imprisoned by culture rather than by nature, in out-dated ideals of aesthetic perfection.
Through the works of 9 artists and a readapting of the classical canons of aesthetic beauty, we have endeavoured to present a varied vision of ‘ugly’ and ‘beautiful’.
What follows is an invitation to rise above ready-made definitions and to search for the essence beyond the form.