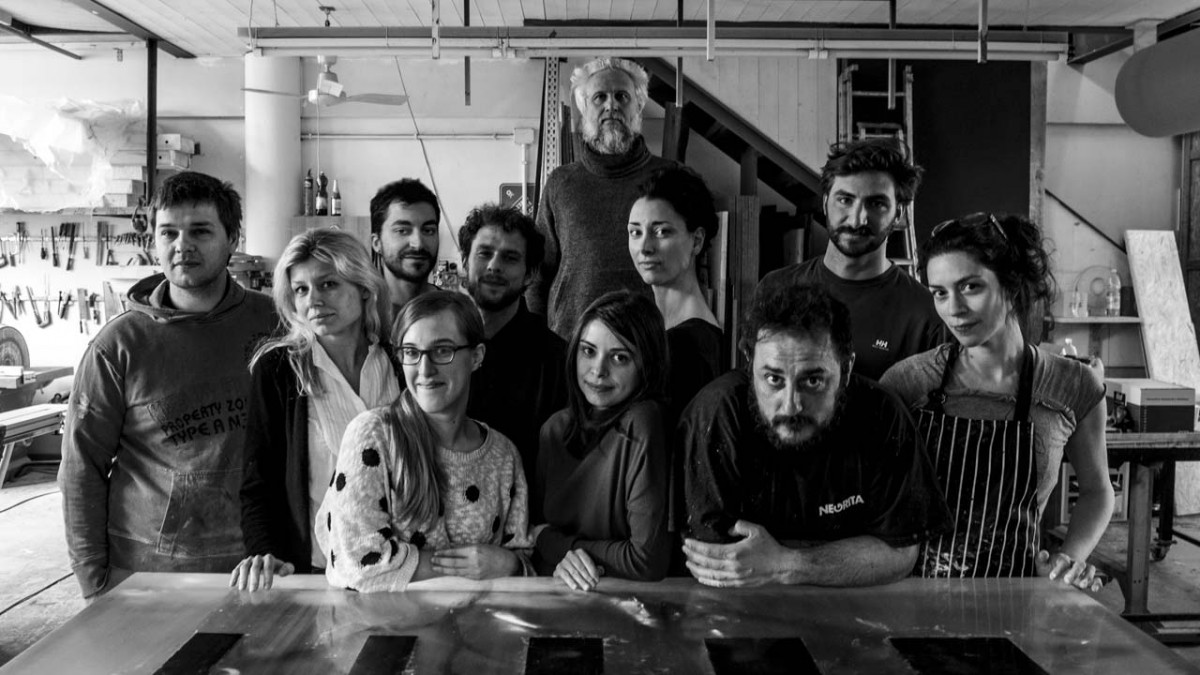 Founded in 1997, Studio Nucleo is a collective working in the fields of contemporary art, design, and architecture, based in Torino, Italy. Led by Piergiorgio Robino (born in Asti, Italy in 1969), its other founders are Stefania Fersini (born in Aosta, Italy in 1982), Alice Carlotta Occleppo (born in Torino in 1981), and Alexandra Denton (born in Gothenburg, Sweden in 1984). Frequently inspired by the subjects of time and place, the studio’s work evokes comparisons between the past, present, and future. Through this theme, Nucleo hopes to influence viewers’ perceptions of themselves and their surroundings. Notable projects include Presenze(2013), an ethereal, handmade series that reinterprets traditional furniture pieces using digitally-inspired, 5×5 cm epoxy resin cubes;Wood Fossil (2013), a wood and epoxy resin furniture series in which pieces appear partially fossilized; and Petroglyph Fossil (2013), a series of hand poured fiberglass and colored, polyester resin side tables and stools created in coordination with Stockholm-based designer Alexandra Denton for L’ArcoBaleno. Nucleo’s work has been exhibited in prestigious institutions across the globe, including the Gabrielle Ammann Gallery in Cologne, Germany (2013); the Museu Nacional do Conjunto Cultural da República in Brazil (2008); the Marco Museum of Contemporary Art in Vigo, Spain (2005); the Centre Georges Pompidou in Paris (2004); the Carnegie Museum of Art in Pittsburgh, Pennsylvania (2004); and the Walker Art Center in Minneapolis (2003). Nucleo has participated in a variety of art and design fairs, including Design Miami Basel, PAD Paris, PAD London, and PAD New York.